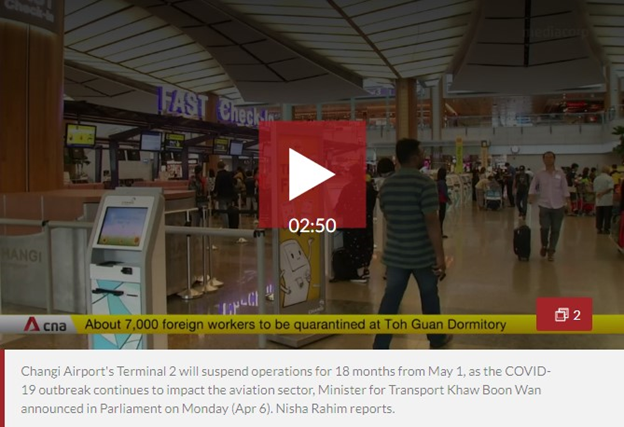 SINGAPORE: Changi Airport’s Terminal 2 will suspend operations for 18 months from May 1, as the COVID-19 outbreak continues to impact the aviation sector, Minister for Transport Khaw Boon Wan announced in Parliament on Monday (Apr 6).

Airlines currently operating at the 30-year-old terminal will be relocated to the airport’s other three terminals, Mr. Khaw said. Singapore Airlines will consolidate its operations at Terminal 3.

Mr. Khaw added that the suspension of operations would allow airport operator Changi Airport Group (CAG) – together with retailers, airlines and ground handling firms – to save on running costs during this time.

“Importantly, it also allows us to speed up the current upgrading works at Terminal 2 and shorten the project time by up to one year,” Mr. Khaw said.

CAG had in January announced upgrading works for T2 that would allow it to handle an additional five million passengers a year. This was scheduled to be completed by 2024.

With the suspension of operations at T2, the completion of expansion works for the terminal could be brought forward by up to a year, said CAG in a media release.

It added that it is in discussions with airport partners and businesses at Terminal 2 on the options available to them.

OPERATIONS AT TERMINAL 4 SCALED DOWN

Meanwhile, operations at Terminal 4 have been “scaled down considerably” in light of the “very small number” of flights there, said CAG.

“If the remaining airlines at T4 choose to suspend or adjust their flight schedule, CAG will also consider suspending operations at T4 temporarily but with the objective of restarting operations quickly when airlines confirm the resumption of flights,” the airport operator said.

CAG said it is identifying retraining and redeployment opportunities for airport staff to protect as many jobs as possible during this downturn.

In Parliament, Mr. Khaw said the authorities would ensure sufficient capacity for all airlines to grow when passenger traffic recovers.

“We can close down one or two terminals, but we must think about post-pandemic recovery,” he said.

“While full recovery this year is unlikely, partial recovery next year is probable. We must be ready to lead and to ride the recovery when it happens.”