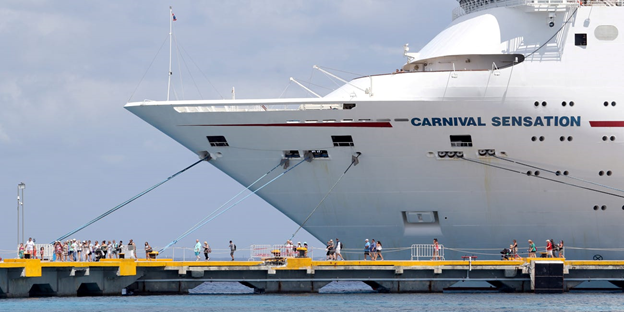 The coronavirus pandemic has effectively shut down the US economy over the last month, compelling the Trump administration to pass a $2 trillion stimulus package to rescue a collapsing economy.

The hefty package — in addition to emergency federal aid for average people — included a $500 billion corporate fund to bail out distressed companies and industries. Major airliners are set to receive around $60 billion of it, and other large businesses will fight for their share of the massive pot of money.

But one sector hammered in the economic fallout won’t qualify for emergency aid: cruise line companies.

They’ll miss out on the corporate bonanza because most major cruise liners aren’t incorporated in the United States, meaning they set up their operations offshore — usually to shield their income from the 21% federal taxation rate for corporations.

The savings is substantial. Carnival, for example, would have had to pony up $600 million in 2019 on its $3 billion in reported 2019 income, NBC News reported.

Here’s where three of the largest cruise lines are incorporated:

Under the stimulus law, only businesses “created or organized in the United States” under American law and those with a majority of their employees in the US can qualify for emergency federal aid.

The Cruise Lines International Association, the industry’s trade group, did not respond to a request for comment.

But the organization previously told The Washington Post: “For the more than 421,000 people in the United States whose jobs are supported by the cruise industry, we will continue to work with policymakers to help our community recover from the impact of this pandemic.”

Democrats balked at bailing out cruise lines during stimulus negotiations. They argued the companies had long shielded their profits from taxes by organizing their businesses offshore and employing foreign workers.

But Trump has expressed a willingness to come to their aid. At a White House press conference last week, the president said he didn’t want to see cruise line companies go bankrupt as a result of the pandemic.

“We can’t let the cruise lines go out of business,” Trump said. “I mean, that would be massive numbers of jobs for our country and, actually, for the world.”

The cruise liners suspended their operations until at least April 14 due to the pandemic. In the meantime, Royal, Caribbean, and Norwegian Cruise Lines have sought cash infusions to remain solvent, CNBC reported.

Royal is drawing from nearly $3.5 billion in backup financing and it recently entered a $2.2 billion loan agreement.

Previous articleBiman extends suspension of all flights till April 14
Next articleCoronavirus: Australia wants all visitors and temporary visa holders to leave