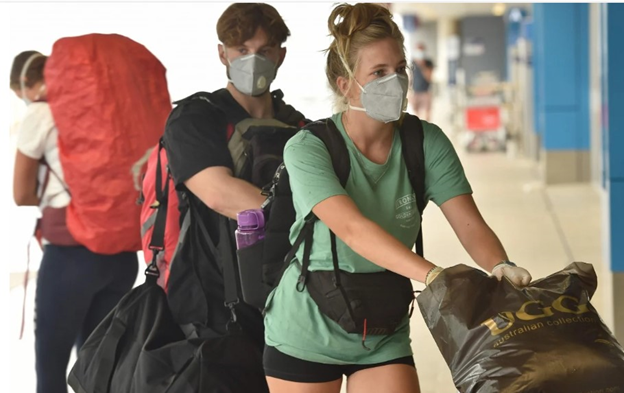 French nationals enter Sydney’s international airport to be repatriated back to France on Thursday. Photo: AFP

The Australian government has said more than 2 million people on temporary visas, including students, skilled workers, and visitors, in the country, should “go home” as soon as possible, amid an economic downturn and joblessness caused by the coronavirus pandemic.

There are 2.17 million foreigners currently in Australia on different temporary visas, and are “extremely valuable to the Australian economy and way of life,” Alan Tudge, the acting immigration minister, said on Saturday in a statement.

But, he said, “temporary visa holders who are unable to support themselves under these arrangements over the next six months are strongly encouraged to return home.” “For these individuals, it’s time to go home, and they should make arrangements as quickly as possible.” This does not include permanent residents.

Tudge said 203,000 tourists in Australia needed to “return to their home country as quickly as possible.”

There are about 118,000 backpackers and other visitors on working holiday visas – a type of visa which provides conditional work rights, Tudge said.

These working holidaymakers will be exempt from work limitations and can have their visas extended if they are employed in certain sectors, including health care, aged and disability care, childcare, agriculture, and food processing.

But if they do not “have the confidence to sustain themselves over the next six months,” they should leave the country,” Tudge said.

Many backpackers have complained about strict restrictions stopping them from finding work and providing for themselves. Many have been stopped from traveling around Australia amid coronavirus restrictions, while conditions in hostels and guest houses have deteriorated due to social distancing rules.

Currently, 565,000 international students in Australia contribute A$32.4 billion (US$19.4 billion) to the country’s economy, making the sector the third-largest largest export after iron and coal, as well as supporting some 250,000 jobs.

They have been encouraged to “rely on family support, part-time work where available and their own savings to sustain themselves in Australia” during the coronavirus-inflicted economic crisis.

Students in financial hardship will be able to access their superannuation – retirement funds. Some of them will get financial support from international education providers, while others will have some flexibility in visa conditions, like attending classes.

International students working in aged care, as nurses, and in the major supermarkets, can extend their working hours if they are allowed.

Suvash Pokharel, a university student in Sydney, told DPA he has not been able to find a job since he was laid off in March.

“I came to Australia because it was possible to work and study here. I am very worried about my future, but I also can’t go back to Nepal immediately,” he said.

Australian Greens Senator Mehreen Faruqi criticized the government, saying it has abandoned international students to the risk of poverty and homelessness during the pandemic.

Hundreds of international students have contacted me over the last few days to share their stories of unemployment, financial stress, and precarious living situations,” she said in a statement.

“Now, the government has confirmed they will not lift a finger to support these hundreds of thousands of students who we welcomed into our country and whose fees and work we’ve all benefited from.”