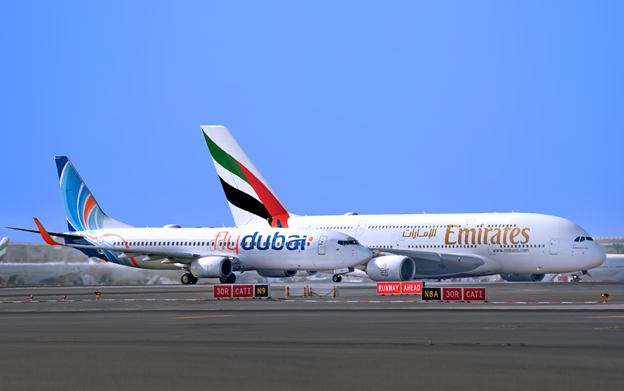 Airlines in the UAE will have 23.8 million fewer passengers resulting in a $5.36 billion revenue loss, risking 287,863 jobs and $17.7 billion in contribution to the national economy due to the devastating impact of Covid-19 pandemic, the International Air Transport Association, said in its latest data.

Following the nationwide closure of all airports and suspension of all outbound and inbound flights in March as part of massive scale efforts to contain the spread of the pandemic, UAE’s once vibrant aviation scene screeched to halt forcing flagship carriers Emirates, Etihad Airways, Air Arabia, flydubai and the new-born low-cost carrier Air Arabia Abu Dhabi to tread water through cost-cutting measures including sending staff of leave.

The UAE aviation industry, a significant contributor to the country’s economy, had been supporting nearly 800,000 jobs while contributing $47.4 billion to the economy, accounting for 13.3 percent of the country’s GDP before the outbreak of the pandemic as all carriers have been on a vibrant growth track, spreading their reach across the globe and turning the country into a global aviation hub. The exponential growth over the past two decades had even prompted Iata to come out with the projection that UAE’s aviation sector would grow 170 percent, support 1.4 million jobs and contribute $128 billion to the nation’s economy by 2037.

“To minimize the broad damage that these losses would have across the African and Middle East economies, it is vital that governments step up their efforts to aid the industry. Many governments in the region have committed to providing relief from the effect of Covid-19. And some have already taken direct action to support aviation including the UAE. But more help is needed,” Iata said, calling for a mixture of direct financial support, loans, loan guarantees and support for the corporate bond market, and tax relief.

Al Bakri said governments must recognize the vital importance of the air transport industry, and that support is urgently needed. “Airlines are fighting for survival in every corner of the world. Travel restrictions and evaporating demand mean that, aside from cargo, there is almost no passenger business. Failure by governments to act now will make this crisis longer and more painful. Airlines have demonstrated their value in economic and social development in Africa and the Middle East and governments need to prioritize them in rescue packages. Healthy airlines will be essential to jump-start the Middle East and global economies post-crisis,” said Al Bakri.

“We are also starting to see several governments in the region providing some financial and tax reliefs, including deferral of aircraft lease payments by the government of Cabo Verde, an extension of VAT refund payment dates in Saudi Arabia and positive considerations for financial relief from governments across the region including Jordan, Rwanda, Angola, and the UAE,” Iata said.

In addition to financial support, Iata called for regulators to support the industry. Key priorities in Africa and the Middle East include providing a package of measures to ensure air cargo operations, including fast track procedures to obtain overflight and landing permits, exempting flight crew members from 14-day quarantine, and removing economic impediments (overflight charges, parking fees, and slot restrictions); providing financial relief on Airport and Air Traffic Control (ATC) charges and taxes; and ensuring aeronautical information is published, timely, accurately, and without ambiguity, ensuring the airlines can plan and execute their flights.

“Some regulators are taking positive action. We are grateful to the Ghana, Morocco, the UAE, Saudi Arabic and South Africa for agreeing on a full-season waiver to the slot use rule. This will enable airlines and airports greater flexibility for this season and greater certainty for summer.  But there is more to do on the regulatory front. Governments need to recognize that we are in a crisis,” said Al Bakri.