This is Definitely Not the End for the Hotel Industry 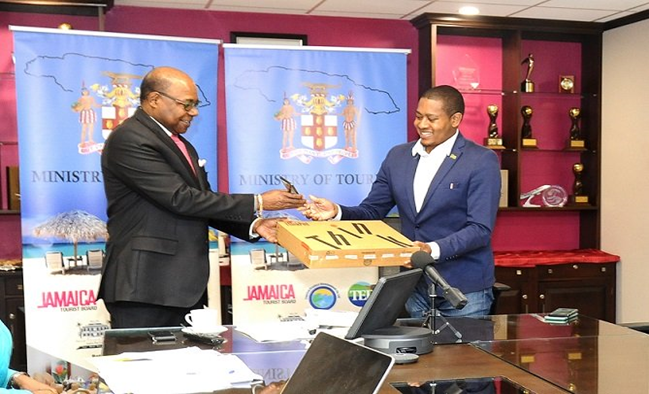 Farmers, who supply the tourism industry, have been severely impacted by the closure of hotels and attractions as well as the downturn in businesses from restaurants, due to the COVID-19 pandemic.

The equipment, which included six laptops and six mobile phones, was donated to the staff of the Agri-Linkages Exchange Project (ALEX), who typically communicate directly with farmers to facilitate the distribution of their products to the tourism sector. The donation will allow the six members of staff to work from home and find new distribution channels for the produce.

Speaking at a digital press briefing hosted at the Ministry of Tourism’s Kingston office earlier today, the Tourism Minister said, “One of our biggest partners in the tourism industry is agriculture. We know at this time the hotels are closed but hopefully for a short time.

“However, the need for the ALEX app is more critical now because small farmers, who have been producing for the industry, would now have an excess in production and would need an opportunity to connect with other entities, so they know what you have, where you have it and the cost.”

With the closure of the hotels, the Centre, which is housed at RADA’s St. Andrew office, will be focused on selling the produce to restaurants and supermarkets.

State Minister in the Ministry of Industry, Commerce, Agriculture, and Fisheries, Hon. Floyd Green welcomed the donation sharing that it would help reduce a large amount of excess produce, which may be wasted.

“For the month of March, due to the downturn in tourism, we have approximately 9000 tonnes of produce that would normally go into the tourism sector that are now an excess. We are talking about billions of dollars that would have been taken up by the tourism sector, that have no place to go.

“But every challenge presents an opportunity and we want to thank the Ministry of Tourism for recognizing that even in this time of difficulty, we can innovate and strengthen the things we do,” said Minister Green.

He added that members of the public are being encouraged to utilize the platform in support of Jamaica Agri-Tourism and to purchase fresh produce in smaller quantities and support the farmers.

“If the general public is wondering how they can get access to this excess produce that we have, they can visit www.agrilinkages.gov.jm.

The site used to be for big orders but the platform is so configured that you can order even two pounds of tomatoes. Now that the team is working from home, they can call the farmers and get them to deliver right to your gate,” he said.

It was developed in 2017 to establish a bridge between sellers (farmers) and buyers (tourism stakeholders) to facilitate the exchange of goods and support Jamaica Agri-Tourism.

Through this exchange center, farmers have had access to a physical space dedicated to calling or emailing about the products they have available to supply the tourism sector. The Centre then markets this information to the hospitality sector and provides support to other key agricultural stakeholders.

There are currently over four hundred farmers registered on the platform.