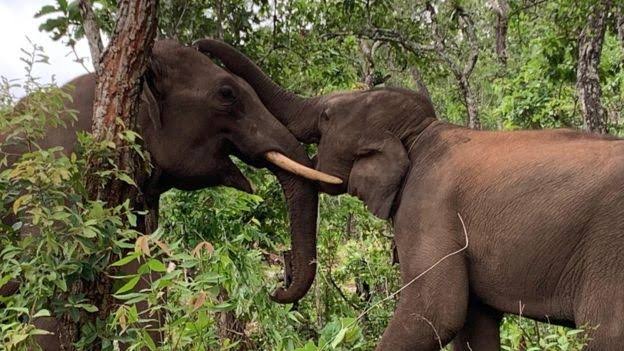 than 1,000 elephants face starvation in Thailand because the coronavirus crisis has slashed revenue from tourism, conservationists say.

An almost total absence of visitors means that many caretakers are struggling to afford food for Thailand’s 4,000 captive elephants.

Thailand reported 127 new confirmed cases of the virus on Monday, bringing the country’s recorded total to 1,651.

Lek Chailert, founder of the Save Elephant Foundation, told the BBC: “If there is no support forthcoming to keep them safe, these elephants, some of whom are pregnant, will either starve to death or may be put on to the streets to beg.”

Alternatively, some elephants may be sold to zoos or they may be returned to the illicit logging business, which officially banned the use of elephants in 1989.

It’s a challenge to keep the animals fed and healthy at the best of times but now it’s the dry season, which makes the situation even more extreme.

Kerri McCrae, who manages the Kindred Spirit Elephant Sanctuary in Mae Chaem, in northern Thailand, said the villagers who live near her had brought approximately seven elephants back to her area because they were not receiving any money from tourism anymore.

“Feeding elephants is a priority but the issue is that there’s not enough forest left to feed them,” she explains.

Ms McCrae, who originally comes from Northern Ireland and is also a co-founder of the sanctuary, has to drive up to three hours a day to find enough grasses and corn stalks to feed the five elephants in her care.

She says local elephant caretakers are forced to do the same.

The country, which normally relies on tourism for a large portion of its economic growth, has been forced to close its borders to all tourists and much of the country is in lockdown.

Happy elephants, Kerri McCrae says, are usually swinging their tails or flapping their ears or even giving themselves dust baths to keep cool. But elephants get depressed when they’re hungry, and none of that happy behaviour would be on display.

“The worst case scenario is that owners will have to chose between themselves and their elephants,” Ms McCrae says. “The people here don’t have much, but they’re doing what it takes to keep the elephants alive for now.”