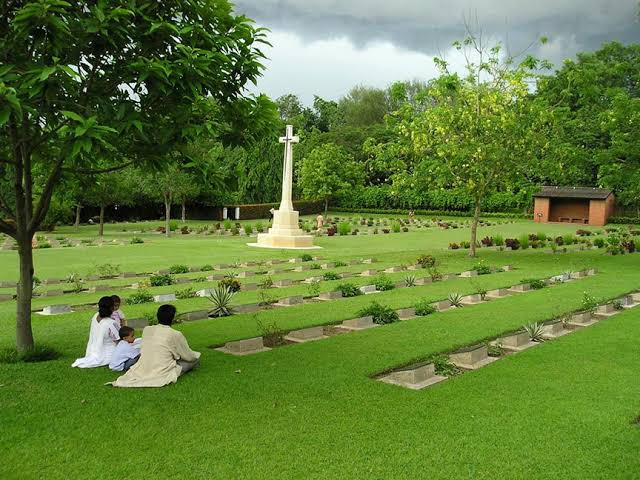 Chattogram Commonwealth War Cemetery is a graveyard, but the number of visitors and tourists it attracts everyday shows there’s more to this place. The sheer vastness and splendour of the site prove that even a graveyard can become a museum-like attraction.

“I brought my daughter to introduce her with the history. It’s a beautiful place, she loves it,” said Rokeya Akter, visiting the cemetery with her five-year-old daughter Alvee.

This is no surprise. The cemetery is designed to evoke a temporal awareness in the visitors, such that even a child may have a rewarding outing. At the entrance stands a large cross that sets the stage for a spiritual trip to the 500 visitors who come here every day.

Located on a seven-acre land at Badshah Miah Chowdhury road, opposite to the Art Institute of Chattogram University, the cemetery was established by the British Army in 1945. It serves as a memorial ground for Commonwealth soldiers and others who died in World War II. There are 755 graves of war victims in the lush parkland.

These soldiers fought against Japanese Army in Burma front during World War II. Those who were wounded in the war were brought to Chattogram General Hospital and Chandroghona Christian Hospital in Kaptai.

Those who died were buried in the war cemetery, said Abu Syed, former country manager of CWGC.

All 755 gravestones bear on them the names, nationalities, age, and date of death of those resting under them. Many gravestones come with epitaphs, and all of them have small gardens beside them.

The cemetery would not be itself without these epitaphs. Left and right, one will see both young ones and the very old leaning forward to read the inscriptions. They make for a surreal experience. To read of a person who once was but is no more, evokes great mysteries in one’s mind.

This reporter spoke to a group of students from Chattogram College’s English department. Shubhechha Ghosh, who initiated the visit, said, “My classmates accepted in an instant when I asked them to come here.” The cemetery is a historic place, a scenic surrounding and its away from the hustle and bustle of society, so it’s clear why Shubhechha’s friends accepted her offer so readily.

One epitaph, of Flight Lieutenant AG Osmand, a Royal Air Force pilot who died on October 20, 1943, reads — “Greater Love Hath No Man Than This.”

To be a Bangladeshi reading this in 2020 must feel fascinating, and it’s one of the things that attracts visitors to this place, not just from Chattogram, but from afar as well.

For example, Arifur Rahman came here all the way from Cox’s Bazar. “I came to know about the cemetery from the internet. It intrigued me, and I came here right away. It’s remarkable that this place is both eye-catching and eye-opening at the same time.”

Plaudits for the cemetery’s maintenance must go to a group of five staffers, including manager Hillol. It remains open from 7am to 12pm noon and again from 2pm to 5pm every day.