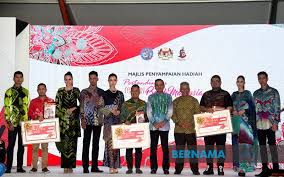 Visit Malaysia Year 2020 (VMY2020) is still succeeding in a good manner as normal following
the schedule of the Ministry of Tourism, Arts and Culture Malaysia (MOTAC) through its
agencies.

She explained that a huge scale VMY2020 promotion campaign had by now been conducted
in foreign lands like Bangkok, Thailand; Berlin, Germany and also in London, United
Kingdom.

At the domestic level, Tourism Malaysia had carried on numerous promotions such as in
Sabah, Sarawak and peninsula Malaysia, she said.

‘’In addition, we also hold co-operations with several nations to bring in foreign tourists to
Malaysia. This has been implemented via several chartered flights, such as recently, when,
for the first time, we brought in tourists from Khazakstan,’’ she told reporters at a friendly
gathering with handicraft entrepreneurs at the Johor Craft Festival at the Padang Angsana
Mall, here today.

Saraya stated that the VMY2020 promotion would go up further from Dec 31 through
‘Ambang 2020’.

‘’We will have a skylight show using drones as a launching gimmick during the night of the
eve of the new year,’’ she said.

Besides, a day later, (Jan 1) a large scale reception for tourists together with the state
governments and Tourism Malaysia will be arranged at 22 entry gates to Malaysia.

‘’Next year too, we will implement over 100 major events to ensure that when the tourists
arrive, we have products to be viewed. And at the same time, we will will have an attractive
list such as the locations of the 20 best eating places packages, 20 honeymoon packages
and others on our website,’’ she said.