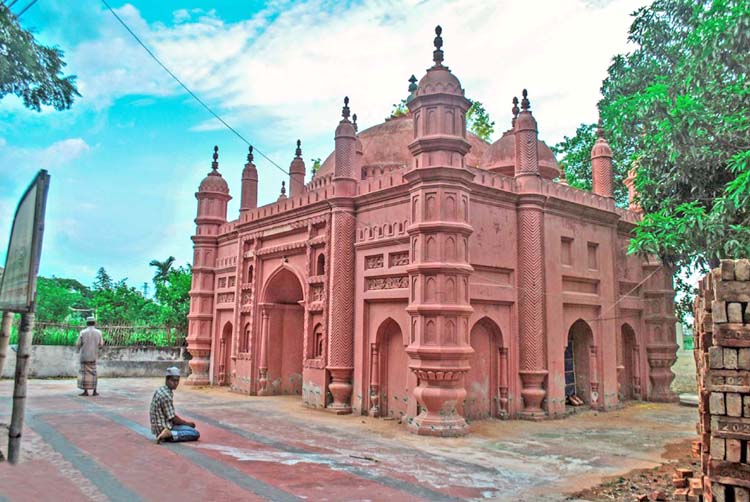 Autshahi Mughal Mosque,is a ruin of Mughal period Mosque, just located beside the Autshahi  Graveyard. It’s silently containing the evidences of ancient time. People are avoiding visiting that site frequently as it is inside the boundary of graveyard.
It has two entrances and one bulbous shaped dome on the top. Basically, from the structural remains it would be very difficult to prove how it was being used or how it became so
How to go
It’s not so far from Chander Bazar. After crossing the Muktarpur bridge you may ride on a auto-rickshaw moving toward Tongibari bus-stop. From there another auto rickshaw or CNG auto rickshaw will bring you to Chander Bazar of Autshahee Union. At Chander Bazar, there are several vehicles waiting for public communication. You may ask to take you to the Autshahee Graveyard.
There are several transport is available from Dhaka to Munshiganj. The bus services are “Nayan Paribahan”, “Dighir par Paribahan” and “Dhaka Transport”, all of the buses used to start from “Gulistan” of Dhaka. It will cost you 60-80 taka, and will require 1 hrs to 2 hrs bus journey depending upon the road traffic.
Also you can hire CNG auto rickshaw from the “Postogola”, and it will take you 250-350 to take you at Muktarpur bridge. Remember, if you are hiring CNG, make sure who will provide the toll of the bridge. For you information, the toll fee is 20 taka. So negotiate with the driver of CNG about who will provide the toll.
Where to stay
Though the district is just beside the Dhaka, still its hard to find a suitable hotel from the district. The main reason, may be people from dhaka used to come this place for a single day trip. But anyway, if you need to stay at Munshiganj town, that case I’ll suggest you to stay at “Hotel Comfort” this one is the best from the town.

Also you there is another one which is “Hotel three star international”. But the quality of the rooms of this hotel is not that much good. For both cases, it will take 100-700 taka per night depending upon the room.

Things to do
Observe the architectural beauty of the Mosque.
Interact with the local people to know about their knowledge and thinking about the mosque.