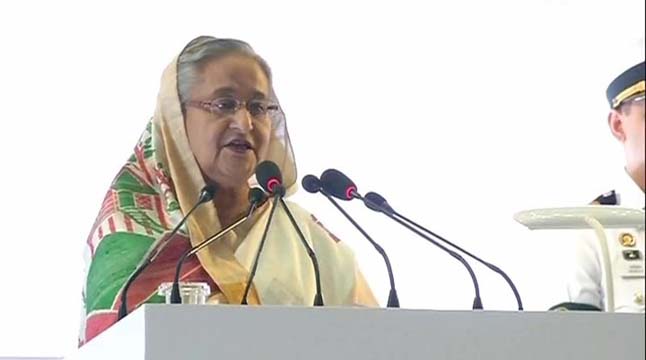 In the northern district, the government is setting up Bangabandhu Sheik Mujibur Rahman Aviation and Aerospace University (BSMRAAU). Bangladesh will be able to make helicopters, aircraft and fighter planes one day in the future from the aeronautical center in Lalmonirhat just like the way the country can now build and export ships.

Prime Minister Sheik Hasina said this at the opening ceremony of the intercity train Kurigram Express on the Kurigram-Dhaka-Kurigram route on October 16, speaking to the residents of Lalmonirhat through a video conference from Gono Bhaban.

The government wants to make the railroads profitable, modernizing them to provide residents with all types of incentives and services, including goods transportation, the Premier said while flagging off the new intercity train via the videoconference.

She added that rail is the most convenient communication for the commoners and all kinds of transportation systems-rail, water, air and road are essential for a country. Therefore, a huge program has been implemented by the government to spread railway connectivity to every division, including Barisal.

“Our goal is to bring the entire nation under railway network, even the southern part. Construction of many new rail routes and repairing of many old rail lines were carried out,” said the Prime Minister.

The government will extend the railway network to Barishal, Mongla in Bagerhat and Payra Port in Patuakhali, she added.

Newly-imported coaches of Rangpur Express and Lalmoni Express were launched by the Prime Minister through the videoconference.

Minister of Railways, Nurul Islam Sujan joining the videoconference from Kurigram also spoke at the launch.

The inauguration ceremony was moderated by Nojibur Rahman, Principal Secretary; while an audio-visual presentation highlighting the development of the country’s railways sector in the last 11 years was made by Md Mofazzel Hossain, Railways Secretary.