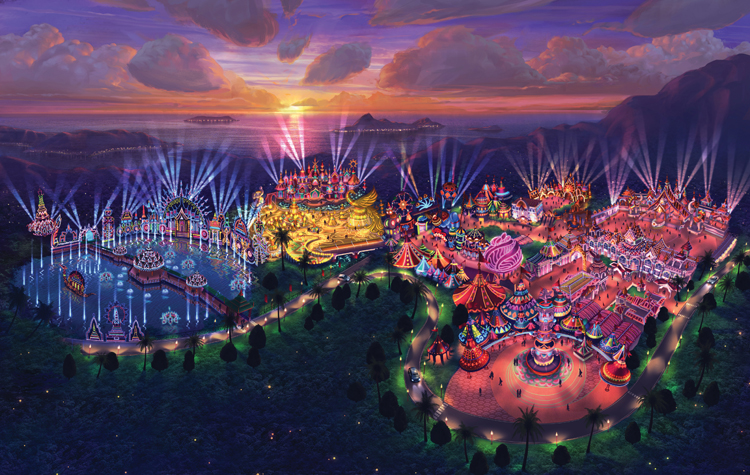 World’s first Thai Carnival Theme Park’s grand opening was celebrated in Phuket, Thailand. A budget of over THB 5 billion ($160 million) and spanning over 40 acres were used to build it. Carnival Magic is expecting to attract over 1 million tourists per year with annual revenue of no less than THB 1.5 billion, it also aspires to become a thrilling new landmark tourist destination in Asia.

(Zone 2)Bird of Paradise Restaurant: A fully air-conditioned gala dining restaurant that can host more than 3,000 guests and is accessed through an enchanted entrance of Garden of Paradise.

On the other hand, in a design inspired by the world-famous Loy Kratong festival, the River of Bliss Restaurant offers a more opulent dining experience. Giant Kratongs (lotus float) reflecting the best of traditional Thai craftsmanship lavishly accentuates the 400-seat dining room.

A special feature of this restaurant is that guests will first arrive at a waterfall known as ‘ Happiness Falls ‘ and climb up to the restaurant via a mystical barge called the ‘ Barge of Happiness ‘ that rises about 7 meters to deliver guests to this unique theme restaurant.

(Zone 3)River Palace Theater: The Paradium River Palace is a display arena that shows the world’s first ever production show of its kind. With seating for about 2,000 visitors and a 70 meter long and 22 meter wide performance stage, the entire building stretches over 200 meters in height, making it one of the largest theaters ever built in the world.

The River Palace Parade, with production elements such as aerial ballet, animatronics and giant creatures, and over 300 cast and crew of the biggest stages ever constructed, presents the very best of Thai culture in an original new show.

(Zone 4) Kingdom of Lights: An enchanting world of dazzling flowers, beautifully decorated with over 40 million lights and spectacular landscapes. This zone mainly highlights the’ River of Lights,’ which features laced luminaries with tens of millions of lights, overall length over 50 kilometers, and offers a panoramic view of the entire illuminated zone best observed by crossing a dazzling lake-spanning bridge.

The official opening of the “Carnival Magic” project will be in early 2020.