BIMAN TO PURCHASE TWO DREAMLINERS FOR THE PRICE OF ONE 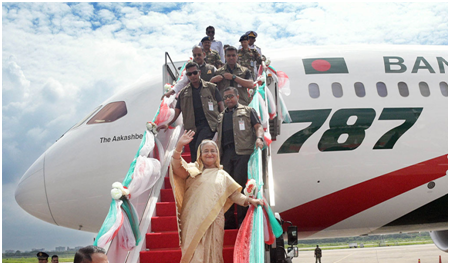 The news has been circulating about Biman Bangladesh’s future plan to purchase two more Boeings ever since Biman has purchased the fourth Dreamliner 787-8 “The Goose” on September 17th. Even Prime Minister, Sheikh Hasina has shown interest in purchasing two Boeings. Later, it was known that Biman would purchase even bigger Boeing, Dreamliner 787-9. Biman and Boeing were negotiating on the price for months. According to the Biman Source, each Boeing Dreamliner 787-9 would be purchased at a price that’s half the market price, so 150 million US dollar reduction in total price.  In December, current year, two more aircrafts would be added to the Biman’s fleet.

Information from various websites show, the current price of Dreamliner 787-9 is 292.5 million US dollar or Tk 2478 crore. According to that criteria, two Dreamliners 787-9 price would be a total of Tk 4956 crore. China’s private airline organization, Hainan Airlines has decided to cancel the deal to purchase these two aircrafts. In this situation, Boeing decided to sell the two Dreamliners at a lower price. Then, Prime Minister Sheikh Hasina has shown interest in buying these two Dreamliners, after which Biman went for discussion with Boeing for the purchase.

An official of the Biman said that a Dreamliner 787-9 model aircraft costs US $ 300 million. Discussion with Boeing Company for prices and accessories began in the first week of October. The Boeing Company proposed a $ 155 million price quote in this regard. Then, Biman gave a proposal of $ 135 million. Knowing this price, Boeing reduced the price by $ 5 million to $ 150 million for each Dreamliner. Regardless of this, the bargaining between the two sides continued. The recent decision was to buy the Dreamliner for a price less than US $ 150 million has been finalized. An additional engine is available along with it. Last Wednesday, at the board meeting of the directors, it was unanimously decided to buy Dreamliner. A state-owned bank will finance the purchase of two Dreamliners very soon and Biman will start paying the Boeing Company from this month.

After the meeting, Managing Director and Chief Executive Officer of Biman, Mokabbir Hossain, told, “The final decision has been made to buy the two Dreamliners. Now we will go forward with this decision.”

When Mokabbir Hossain was asked about the prices of the two aircrafts, he said that usually the price is not disclosed. However, two planes will arrive this year.

“I had the idea that Boeing manufactures and sells an entire aircraft, but that is actually not true. Boeing only manufactures the body. Various accessories and engines are purchased from other companies. For example, Boeing adds the General Motors’ or Rolls-Royce’s engines to their aircraft. We have done a research and found that General Motors has better engine quality than Rolls-Royce. In addition, seat covers or other machineries that will be purchased from which company, the quality of color, and the type of interior decoration etc. make variation in the price of the aircraft. Boeing has a separate catalog for everything.” As stated by a Biman official who is directly related to the discussion with Boeing.

The official said the price of any aircraft is never disclosed. This is not done for business purposes. As Emirates is a big buyer of Boeing, they might have a contract to buy 100 aircrafts at once. In that regard, Boeing will offer a variety of benefits such as lower cost to retain this kind of large buyer. But for smaller buyers, the price will be a bit higher. However, it is important to get experts’ advices on prices and various other matters.