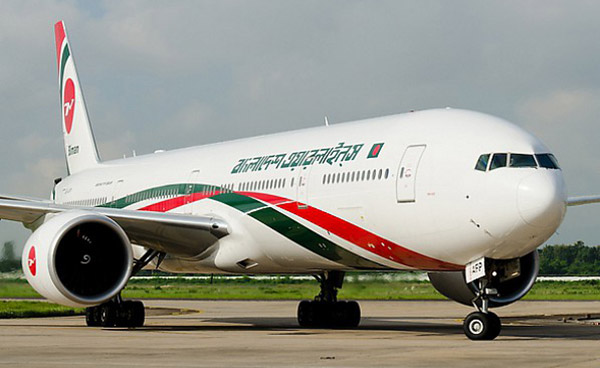 Bangladesh Biman will be starting direct flights from Shah Amanat Internaitonal Airport, Chattogram to Madina, Saudi Arabia. Starting from October 31st, Biman will carry passengers in Boeing 777 on Chattogram-Madina route. Current plan is to have one flight weekly that is on Thursday, but if the turnout of passenger is high then more flights will be introduced.

At present there are no direct flights for national or foreign airlines on the Chattogram to Medina route. Currently, passengers of Chattogram are going to Madina via Dhaka Airport. If a passenger is flying from Chattogram then first they arrive in Dubai or Jeddah, and then go to Medina. Chattogram passengers will find it easier to go to Madinah if the direct flight starts. It will not only reduce the flight fares by Tk 5,000 but also save time and reduce hassle.

Referring to the launching of the flight from Chattogram, the former president of the Junior Chamber Gias Uddin said that he had come to Chattogram on the Air Arabia flight via Sharjah, the last time when he returned after the end of Umrah Hajj. This hassle would not have happened if Biman Bangladesh had a direct flight, it wouldn’t have taken long. Now it will be much easier to do Umrah Hajj on a new route. The expatriate Bangladeshis could reach their homeland directly from Medina. For this to happen, it is very important for Bangladesh Biman to keep the flight schedule on time.

Arifuzzaman Khan, acting manager of Bangladesh Biman at Chattogram Airport, said: “Umrah Hajj and expatriates will benefit the most. On the new route, a passenger can travel directly from Chattogram to Medina and then via Jeddah back to Chattogram. If you go to Jeddah then you can reach Chattogram directly from Medina. This is a great opportunity for expatriate Bangladeshis living in Medina.”

Hajj agencies said that the Umrah pilgrims from Bangladesh will rise to three million this year just because of the Saudi Arabian government’s decision to reduce visa fees. The number was slightly more than two lakh in the last Umrah season. This time a large part of the Umrah pilgrims will also be from Chattogram.

Mentioning the great benefits for the expatriates of Madinah and the passengers of Chattogram, Haj Agencies Association of Bangladesh (HAAB) Chattogram president Shah Alam said, “Umrah Hajj travelers will first go to Medina and visit the grave of Prophet (SAW). After that, they will go to Mecca to complete the Umrah, and then they can come to Chattogram directly from Madinah. Now a passenger first arrives at Jeddah Airport from Chattogram and goes to Mecca and performs Umrah. After the Umrah, pilgrim goes to Medina by road for six to seven hours. Then, pilgrim travels to Makkah for seven hours and reaches Jeddah Airport and then fly back for Chattogram.

It has been reported that a Muslim’s Umrah package from Bangladesh costs from Tk 90,000 to Tk 1 lakh 20,000. This 14 day package includes meals, transportation costs, airfare and visa fees. The Saudi government’s new rules will certainly reduce the cost of passengers, but it depends on the agencies operating the Hajj.

HAAB President Shah Alam said that the cost may not be reduced. However, passengers’ time will be saved and travelling will be comfortable.