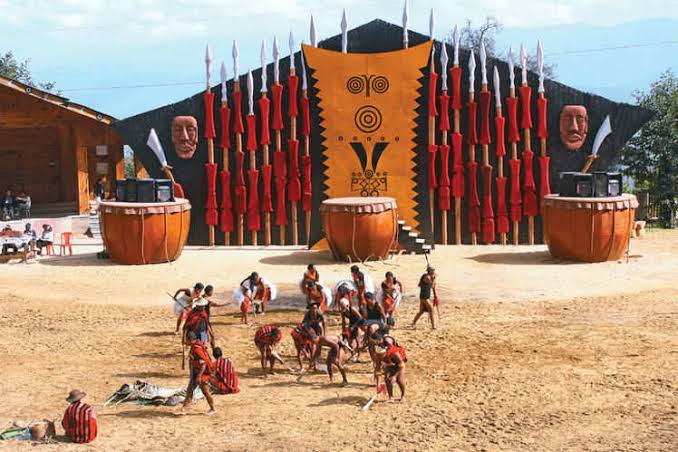 Nagaland’s Hornbill Festival is one such extravaganza that celebrates the age-old customs and traditions of the state, which are also unique in every sense. Hornbill Festival 2019 promises the splendour and amazement of every other Hornbill Festival in the past. One of the most important festivals of northeast India, Hornbill is celebrated at the Naga Heritage Village that is about 12 km away from Kohima.

Photo by:  Hornbill Festival, Pix by Vikramjit Kakati, Creative Commons Attribution Licence
The festival is a traditional celebration involving seventeen Naga tribes, and is a chance for every traveller to get a closer look into the different tribes of the state. A once-in-a-lifetime opportunity to explore the Naga lifestyle, their tribal huts, and their customs.

The 17 tribes that take part in the festival are Angami, Ao, Chakhesang, Chang, Dimasa Kachari, Garo, Khiamniungan, Konyak, Kuki, Lotha, Phom, Pochury, Rengma, Sangtam, Sumi, Yumchungru, and Zeliang. Each of these tribes showcase its unique dance, music, and customs, while there is plenty to eat, drink, and more. After sundown, there are bonfires and lots of performances, so do not miss out on that.