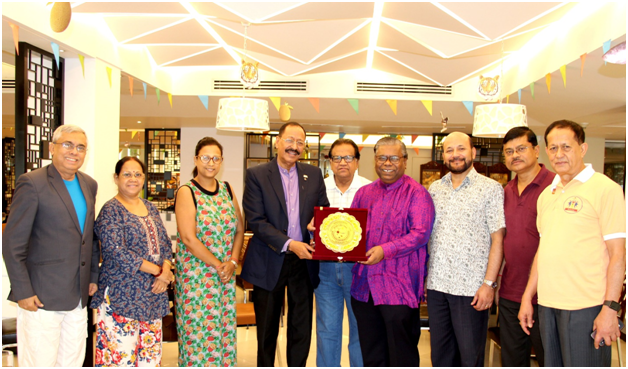 Executive Director Shahid Hamid FIH of Dhaka Regency Hotel & Resort received a Lifetime Achievement Award from Rotary International Zone 6B in Dhaka on Saturday at the closing ceremony of Rotary Public Image International Conference 2019. The award recognizes Hamid’s relentless commitment to ensuring superior hospitality services and continued upward progression of the sector throughout his tenure in the Bangladesh tourism and hospitality industry since he began his career forty-one years ago.

“Mr. Hamid is a hotelier through and through,” explained PDG SAM Showket Hossain MPHF B MC PHS, the current Public Image Coordinator of Rotary International Zone 6B, upon handing over the crest. “His entire career has been focused on ensuring personalized hospitality to each individual that he has encountered, and not only within the walls of whichever hotel he is employed but rather wherever he happens to be at any given time and space. This award, however, we present to him for his outstanding dedication towards extending his hospitality beyond his personal triumphs, which he has been generous enough to share with the hospitality industry every time. He has served on an advisory level in public-private tourism bodies, mentored youths at tertiary stage, and taken fledgling organizations to unprecedented heights. Not only that, but he is also recognized globally for the contributory roles he plays in numerous worldwide inter-nation associations. He is a true living legend.”

Hamid started his career in 1978 with Hotels International Limited (HIL), the public limited company that commenced the journey of Pan Pacific Sonargaon Hotel, and his dynamism quickly gained him a series of strategic posts, including serving as General Manager, both in Bangladesh and abroad. He is the first ever Bangladeshi to be elected on to the Executive Board, the highest policy making body, of Pacific Asia Travel Association (PATA) Global in the sixty-years of the organization’s history. He is also an affiliate of an impressive number of international travel-based associations, including Institute of Hospitality UK as Fellow, Cornell Hotel Society (CHS), SKAL International Bangladesh, Bangladesh International Hotels Association (BIHA), and Chairman of PATA Bangladesh Chapter. The Bangladesh Hotel & Guest House Owners Association awarded him as the “The Best Hotelier” of the Year 2005 and, in 2017, he received the Lifetime Achievement Award for his long contribution in tourism and hospitality industry in Bangladesh.