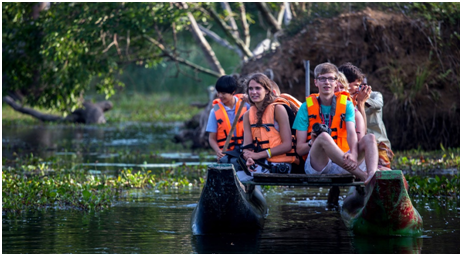 Sri Lanka has re-introduced and expanded a visa-free entry scheme for visitors in a bid to revive its flagging tourism sector after the deadly Easter bombings, officials said yesterday.

The visa concession for tourists from 39 nations was suspended after Islamists bombed three churches and three luxury hotels in Colombo on April 21, killing 258 people, including 45 foreigners.

“As the security situation has improved, the Cabinet of ministers decided to revive the visa-free scheme, and also extended it to seven more countries,” the government said in a statement.

A tourism official said foreign governments have eased travel advisories for Sri Lanka since the attacks. There has also been a rise in the number of arrivals, which nosedived soon after the bombings – blamed on a home-grown militant group, the official said.

The new countries added to the expanded scheme – which already allows travellers from the European Union, Australia and the United States to enter Sri Lanka without a visa – include China and India.

Visitors still have to obtain a visa on arrival, but the government has waived the US$35 (S$48) fee, starting from Aug 1.

Sri Lanka had initially projected a 30 per cent dip in the number of foreign holidaymakers after the attacks in April.

The following month, the number of tourists plunged to 37,800, down from 166,975 in April, according to official figures. But they improved last month, which saw some 63,000 visitors, although numbers are still down from the 146,828 in June last year.

Meanwhile, the Guardian newspaper recently reported on its website that the Sri Lankan government has said it will reduce airline charges to help boost tourism.

The price of aviation fuel, ground handling and embarkation fees will be reduced for six months at Colombo airport, to encourage airlines to reinstate schedules, increase the number of flights and lower ticket prices, said the July 9 report.