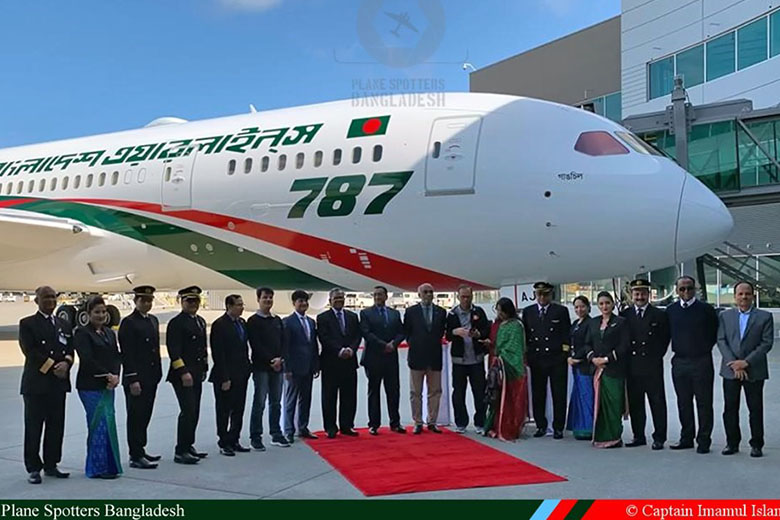 Biman Bangladesh Airlines added the third factory fresh Boeing 787-8 Dreamliner to its fleet. The new aircraft named “Gangchil” landed at Hazrat Shahjalal International Airport in the afternoon.  Earlier in the day, Biman said in a press release that the third Dreamliner would arrive today to join the fleet of the national flag carrier.

With the state of the art technology equipped Dreamliner, the number of aircrafts in the national airlines would be 15. Biman Bangladesh made deal to purchase 10 aircrafts from US aircraft manufacturer Boeing in 2008. Of these, Biman already received four new Boeing 777-300ERs, two 737-800s, and two 787-8s Dreamliner. The third 787-8 is scheduled to arrive today and the last one is expected in September.

Prime Minister Sheikh Hasina has selected the names of four Dreamliners as Akash Beena, Hansabalaka, Gangchil, and Rajhanso.The prime minister will inaugurate the third Dreamliner on August 7. Gangchil has 271 seats comprising 24 business class and 247 economy class seats. The business class seats can be flattened to 180 degrees straight. The passengers can receive modern facilities including internet and mobile phone calling.